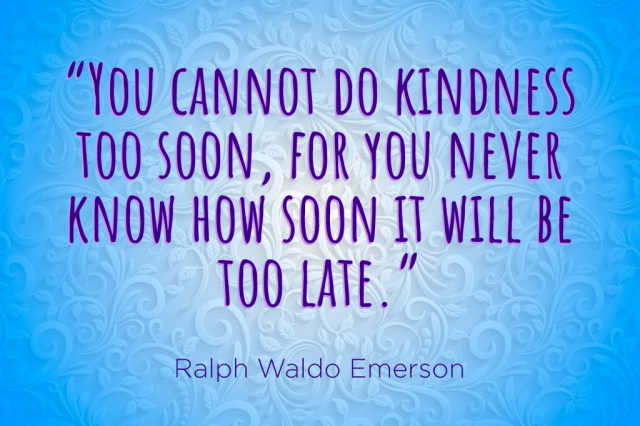 She then went on to explain that more often than not, the people who sent her a card early in December are the people she can count on to be there for her, and the one’s she receives after Christmas are the ones who consider her an afterthought.

This got me thinking….

If someone is only nice because someone was nice to them, is it still considered kindness?

And at what point does kindness stop being about what we can do for others and what we can gain from kindness?

If someone is only kind because of what they can gain from kindness, is it still considered kind?

It doesn’t matter what the act is. I have heard several people say they don’t comment on other’s blogs until they comment first. Well what if everyone had that same mentality? No one would ever talk to anyone. What if someone is shy and they are waiting on you to make the first move?

How many people miss out on amazing opportunities because they are busy waiting?

I once worked for a man who actually admitted the only reason he went on so many missions trips and went out of his way to help other’s in third world countries was because it made him look good, and he was seen as a hero. He also admitted that the only reason he donated so much to charities was because of the enormous tax deduction from his business.

So is it really kind if the only reason he helps others is to feed his ego and line his pockets? I mean those people are still getting help regardless, but would he still be as helpful if it didn’t make him look like a hero or fatten his wallet?

Personally, I suppose I believe the act is that of kindness, but the kindness itself, when acted out for personal gain, is not genuine.

Now I know what you must be thinking, “But Kristian, you are a big supporter of paying it forward.” And you are absolutely right, I am a big supporter of paying it forward, and when an act of kindness (no matter how small) is shown to you, I absolutely believe you should pay it forward, however; if the only time you show kindness is in return to someone else’s kindness, you might want to step out of that box and make the first move for a change. That’s all I’m sayin’

AND…… it is not about what you can gain in return!

So if someone doesn’t send you a Christmas card? Who cares! Send them one anyway. If you see a blog post you really like but that person has never commented on any of your blog posts, comment anyway.

There are millions of ways you can show kindness, and it doesn’t always take money, and it can be done for people you know & complete strangers, and you don’t have to wait until an act of kindness is shown to you before you can do something kind for someone else.

Be Bold! Be Creative! And ALWAYS be Kind!

46 Responses to Is Kindness Always Genuine?