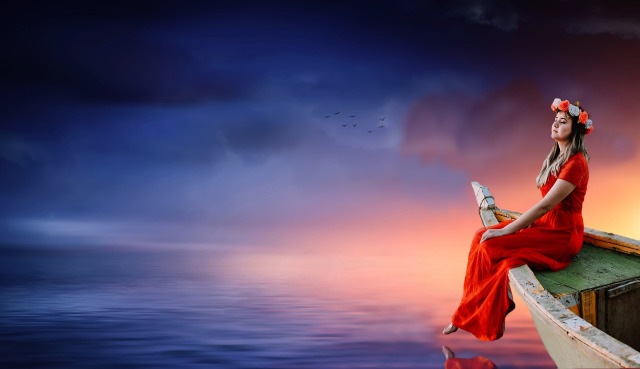 I woke the next morning with thoughts of Jared running through my head, mostly his beautiful smile, our conversations, and how sweet he was. I don’t think I’ve ever met a man so sweet. After brushing my teeth and making myself somewhat presentable I meandered downstairs to fix breakfast only to find that he had already beat me to it.

“My aunt is going to be displeased with me if she finds out you cooked me breakfast and not the other way around.” I told him as I hoisted myself onto the counter, crossing my legs.

He walked up to me, handing me a mug of coffee and allowing his gaze to wander down to my legs and back up to my eyes, it was very subtle, and he didn’t gaze long, but I caught it. “She won’t be displeased, I make her breakfast sometimes too.”

“Awe, that’s so nice of you, but I’m surprised she lets you.”

“Well, I told her about my world famous french toast, and from then on, she couldn’t resist.” He said as he grabbed a small piece on a fork and fed me.

He flashed me that eye reaching smile, staying close in my proximity. I inhaled sharply, savoring the moment. “I think I’m going to fall in love with you,” I whispered.

He played with a strand of my hair, never turning his gaze away from mine before moving his lips next to my ear and whispering, “Good, because I’m already falling.” He kissed my cheek and turned his attention back to breakfast.

Despite his protests, I cleaned up after breakfast, using his own words, “You cook, I clean, that’s the rule,” against him.

Jared left for work after that and I was left to my own devices, so I waited around for a few hours, just in case someone showed up to the b&b, but thankfully no one did. I decided to venture out to my favorite cafe and local bookstore. I bought the latest Sparks book and a London Fog and found a bench on a dock to sit and read. It was another beautiful day, not too hot, but warm enough that the breeze off the water felt good. The wind whipped through my hair and I leaned my head back and closed my eyes, relishing in the feeling of the cool wind on my skin and the sunshine on my face.

I sat long enough to read the first chapter before stopping at a quaint little shop that sells bread from the local bakery, and my favorite Vermont, sharp cheddar.

As I was putting the few groceries away I heard some strange noises coming from outside, so I walked around to the back of the house to find Jared sanding my aunt’s boat that I had told him about over breakfast. I stopped and watched his large, strong hands sanding the wood, and the muscles in his biceps as he worked back and forth. It was the first time I had seen him in a tank top, and his arms were even more toned than I imagined, and his tattoo only added to the attraction I was feeling. He looked up and spotted me, smiling before greeting me. I walked over and sat on the bow, continuing to watch him work.

“I didn’t tell you about the boat so you could work on it for me.”

He sighed, “Would you please just let me do something nice for you?!” He replied sounding a little irritated.

“I’m sorry,” I hung my head, feeling a little ashamed.

I didn’t hear him approach me, but he gently lifted my head to meet his gaze. “I didn’t mean to berate you,Angela, I just want to do something nice for you, please stop treating me like a guest.”

He smiled, “You deserve the best of the best, sweetheart.”

I leaned into his touch, relishing in the feeling of how gentle he was.

I moved to grab another sander and helped him work on the boat. He raised his eyebrow at me, I think more at the fact that I was in a sundress rather than knowing how to use a sander.

We worked away, listening to Tom Petty and before we knew it the sun was setting.

Both of us hot from working so hard, we decided to just eat lightly, so I made a charcuterie board, and Jared poured us wine, and we sat out on the porch, cooling off, and Jared told stories that made me laugh.

I learned that night that he knew how to play guitar and I couldn’t help but wonder how he was so perfect. Great with words, funny, good looking, hard working, can dance, and now he can play guitar.

“Earth to Angela,” he snapped his fingers.

The biggest smile stretched across my face, “My aunt has one, will you play something for me?”

He nodded his reply and I squealed in delight, twirling around, and he chuckled at my reaction. I ran into the house to grab the guitar.

When I walked back out onto the porch Jared was leaning against the porch railing, stretching his neck, and I just couldn’t stop staring at his hands. I still don’t know exactly what it is about a mans strong hands that drives me crazy, but Jared’s were perfect. When he took the guitar from mes, his fingers gently grazed mine, and we touched a little longer than normal, and once again I was in a trance by the look he was giving me.

“Any requests?” He asked.

“No, just whatever comes to your mind.”

He sighed deeply, but not in annoyance, he sounded nervous, so I smiled at him reassuringly.

“Whatever, just play,” I waved him off.

He tuned the guitar to his liking and then he began strumming the chords to Jim Croce’s “I’ll Have To Say I Love You In A Song,” which I recognized instantly.

I watched him in amazement, the way his long fingers so delicately danced across the strings, the way he’d close his eyes as he sang, getting more and more confident with each verse. He may not have been the best player or the best singer for that matter, but to me his voice was beautiful, and his guitar playing skills were magnificent, and I just didn’t want him to stop. He could have played me the alphabet and I would have still been in awe, but somehow I felt like these words falling from his lips, and the chords that his fingers were playing were directed towards me.

He looked at me as he sang the last line and I walked over to stand next to him.

“That was beautiful, Jared,” I said as I leaned my head against his shoulder.

“I’m glad you enjoyed it,” he replied, kissing my forehead.

He started playing again, this time, “Might As Well Dance,” by Jason Mraz, which made me squeal with delight for the second time that night, and once again, he chuckled at my reaction.

I danced and spun around the porch as he played, and I realized I was completely smitten, even if I wanted to, there was no turning back now, I no longer had any say in the matter, he’s the one my heart chose.

EEEEK!!!! I am loving where this story is heading. I hope you all are too!

This entry was posted in Ficton and tagged #romance #shortstory #fiction #prompt #fallinginlove. Bookmark the permalink.