I was gifted this award by the wonderful Rory, author of A Guy Called Bloke and K9 Doodlepip. Rory has a very eclectic blog filled with stories of his upbringing, his life with Asperger’s, pieces of fiction, wonderful poems, quotes, and various other fun oddities. If you have not checked out his blog, I strongly encourage you to do so!

You can read the post where Rory nominated me by clicking on his name.

The guidelines for accepting the Real Neat Blog Award are pretty straightforward: 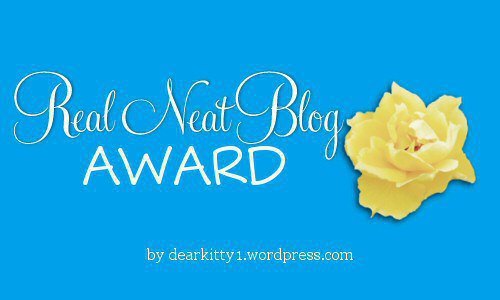 Make a list of 10 items or things you bought and never used or regretted buying?

I can’t think of anything else I’ve bought that I didn’t use or that I truly regretted buying.

Describe the strangest dream you’ve had in your life?

Okay, so I have lots of strange dreams. The majority of my dreams are really strange, but I’ll share two that really stand out.

What is that one thing you would never do even if someone offered you all of the money in the world?

I would never inflict harm on another person or animal. No matter how much money was offered, I just wouldn’t.

What was the most embarrassing moment of your life?

I was thirteen or fourteen and I had the biggest crush on a boy named Chad. I didn’t know Chad all that well, but he was cute, played basketball, and I had seen him advocating for some charities and working with children and those kinds of guys have always wooed me. Anyway, I was at a local retail store with my mom. I had bought a few things and had already checked out, but she was still shopping, so I went back to the CD section to check out some new music, well, on my way I was swinging the bag of whatever I had purchased (I can’t remember what it was,) and the bag slipped out of my hand and hit this guy on the back of the head. He turned around and of course, it was Chad. I was mortified, and apologized profusely. He just chuckled and kept walking, of course, in the same direction I was heading. So I was strolling along behind him, admiring his beautiful, sandy blonde hair, and I failed to see the wet floor sign, the floor wasn’t just wet, it was extremely slippery and I was wearing no tread flip flops at the time. I slid forward and rammed right into the back of chad, I instinctively grabbed a hold of his shoulders and we both fell to the floor. My face was as red as a fire hydrant at that point. He told me that he would just walk beside me to avoid any more casualties and I couldn’t speak, so I just nodded my head in agreement. I remember telling myself to walk tall, keep my head up, and not swing my arms too much, looking back I probably looked more like some sort of awkward robot than a young woman trying to be graceful. Ha ha! Well, right about that time another boy I had met at an ice skating rink a few days prior and scared the crap out of came up and pushed me, lightly, and said “That’s for scaring me at the skating rink the other day.”

It caught me so off guard that I lost my balance and fell into Chad, once again, only this time, we took out a shelf of shoes. And without even thinking I blurted out “I guess I’m really falling for you, aren’t I?”

Oh. my. gosh…. I was sooooo embarrassed. I don’t even remember if he said anything to me after that, or if he just ran as far away from me as possible, which honestly, who could blame him? But I’m red right now recalling the memory. Hahaha!! I’ve always been clumsy.

What is the most stupid thing you’ve done in front of a crowd?

*Sigh* I tripped over a bush. I’m going to sound completely boy crazy here, but about a year had passed and I’d moved on from Chad to a guy named Brian. Brian and I actually conversed though, and my confidence had grown some by then, but I was shouting to him across a parking lot, he was headed towards his bus and had asked me a question. The entire school was outside and witnessed me tripping over a bush because I wasn’t paying attention to my surroundings, lost in my own little world. Yeah, rather stupid….. Lol!

If you were marooned on an island with one person whom you know personally, who would you like to be that person?

Originally I thought my husband, of course, but, he wouldn’t be able to receive dialysis and would eventually die and I can’t have that. Then, I thought my friend, Amanda, but she’s a mom and I can’t very well have her away from her son for Lord knows how long we’re trapped on this island together, so that leaves Christen. Her boyfriend, Nick might have some say in the matter, but I’m sure she wouldn’t mind getting stranded on an island with me.

And then I thought, well if that doesn’t pan out maybe someone here in the blogosphere, hahaha…. not that I actually really know any of you outside of blogging……

And I just realized I am waaaaay overthinking this. Hahaha!!!

Would you rather Be the funniest person in the room or the most intelligent?

Funniest. It can be exhausting being the most intelligent person in the room.

I always have the hardest times with nominations, & I normally don’t do them because I feel bad leaving anyone out. I wish I could nominate all of you, however; I do like the thought of introducing bloggers to other bloggers, & I am all about spreading love so….

I would like give the gift of this award to:

There is no obligation to accept the award. I just want to spread the love & shine a light on your fabulous blogs!! 😊

1. What do you think are the 5 most beautiful things on earth? Why?

2. What’s your idea of the perfect day?

4. If money didn’t matter, what would your dream job be?

5. What’s something you haven’t done, but have always wanted to?

6. Which fictional character do you most identify with?

This entry was posted in Awards/Tags, This Is Me and tagged #blogawards #thereallyneatblogaward #questions #spreadthelove. Bookmark the permalink.