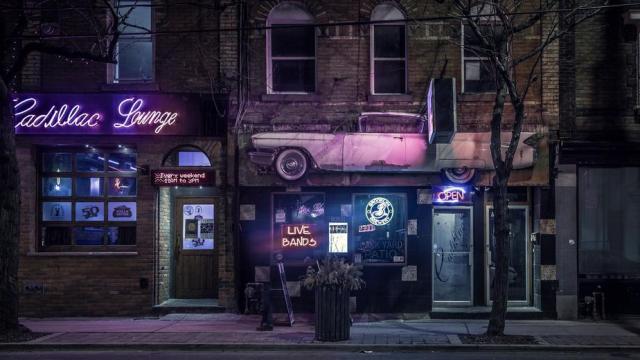 Dean could no longer control his feelings, there had always been something about her that pulled him in, just the way a moth is drawn to the flame, but just like the moth, he could also be a fool, flying into her fire. He was scared. Scared to let go of his heart, scared to hand over this power to her, because with it, she could kill him. He hung his head, placing his hand on the wall, next her head. He sighed in defeat, he was starting to wonder if it was worth risking the pain, if she was worth dying for. As soon as her delicate fingers lifted his chin and brought his gaze to her own, he realized she was the answer, she was the answer to the question his soul has been searching for. Finally, he understood. If someone were to ask him “Where’s home?” He would simply say, Lorraine.

He walked slowly towards her, until her back was against the wall, and his body pressed against hers. Both of his hands resting on the wall on either side of her head.

The scent of his cologne tickled her pheromones and she couldn’t control the small, yet recognizable moan that escaped her lips.

Well, that sound perked him up a little. He raised an eyebrow, any doubts of weakness he had been feeling for allowing himself to fall under her spell were shattered as he realized she had this remarkable ability to make him feel manly, as vain as that may sound, it’s true. What man wouldn’t feel good having a woman moan because of him, and he hasn’t even touched her yet? Had he found his vixen?

“Where have you been all of my life?” he asked her, breathlessly.

She chuckled, throwing her arms around his neck, “Around,” she replied before kissing him.

Before things continued further he pulled back “Wait, wait, not like this.”

He softened his features while he looked at her hoping she would understand he meant no ill towards her. “You must understand something about me.” he swallowed thickly. “I’ve been a broken man for a long time, I have moments of doubts and weakness, times where I feel lonely and lost, in those moments is where I need a woman whose patient with me, who will let me come to her in my own time, because I often just need time to think. I am so afraid of getting burned again. It’s not you, it’s not that I don’t trust you, it’s trust itself I have the issue with.

“I need you to know that you’re not getting some prince on a white horse or a knight in shining armor.”

He turned from her and sat down on the entry way bench. “I’m no hero.”

Lorraine sat down next to him and placed her hand over his, “May I tell you something?”

He looked over at her, surprise etched on his face as he realized she was respecting his wish of time to himself.

“I’ve always preferred vampires over princes. “ She smiled before continuing, “And of course I don’t want you wearing all that armor, it would take far too long to get you naked.

Dean laughed and Lorraine was elated, knowing she was the cause of it.”

“You’ve been broken, you’ve endured the pain of a broken heart, you’ve felt the sting of betrayal, you’ve felt insurmountable loss. Most people are weak, most people would have cracked, and become the same monster that beat them. Not you, you spread light and love in a dark world, you relish in the moments that take your breath away. You still care. Do you have any idea how commendable that is? I’m in awe of you. The world may not see you as a hero, but I certainly do.”

She straddled his lap and kissed him so passionately. She really tried to put all of the love she felt for him into that kiss.

He looked up at her. “I need to know if this is moving to fast for you, because if I’m going to leave tonight, it has to be now.”

Lorraine was genuinely surprised at the strength he must have to maintain a gentleman in this situation.

“How do you like your coffee in the morning?”

Note:  I claim all content as my own personal work. Any & all rights belong solely to Kristian L. Cosner Weigman. Any and all use of this work without my permission is strictly prohibited

This entry was posted in Ficton and tagged #fiction #romance #love #itsgettingsteamy #home. Bookmark the permalink.

7 Responses to The Cadillac Lounge – Part 5